VOSIM is one of the voices that comes with the Chipspeech software and the first of the additional post-release vocal added to the software. He was added as the 8th vocal to the software.

VOSIM was an early prototype sociable android companion. The project was scrapped because his voice was not intelligible enough. He spent many years wandering the electronic wastelands alone, until the day decided he could try to be someone, get friends, and not let his weaknesses deter his desire to sing.

Like Dandy, he has some memory issues, his are due to trauma. He has no need to eat and cannot do that anyway.

VOSIM once wonder how he would/could "die". The only way he could think of was if his battery ran out.[1] On tumblr he mentioned that water could short circuit him and harm in the process.[2]

He has mentioned that he could easily break Dandy 704's body.

Despite his twitter name being "AWESOMEVOSIM" Vosim is the shyest of the Chipspeech robots and is generally more concerned with the others then they are with each other. A lot of his personality comes from monophobia caused by his experiences in the past. This makes him a little bit of a walk over at times, though knows how to put his foot down when things go too far. He is also a little naiver then the others for example he once bought some reduced price chocolates from a store even though he can't eat them.[3] He also likes and keeps fish though is frightened by pigeons and birds that remind him of them.

He also worked at a library at one stage.[4] He mentioned doing music gigs and having other jobs but always being fired from them.[5] His facial appearance was off putting to customers.[6]

He likes making new friends but finds being assertive very hard. He wishes he had more human trait as he is aware people stare at him.[7] He is naive towards human traits, making him unable to understand why CiderTalk'84 voice was cracking prior to him loosing it.[8]

When active, he used to post pictures of fish on tumblr. He mentioned also he was not a reader of poetry.[9]

At one stage, he and Dee Klatt were a couple though they have since ended their relationship. Dee still hangs out from time to time at VOSIM's home.

The time he and Dee spent together was mostly referenced on tumblr. Dee was VOSIM's first romatic relationship.

The worst to take advantage of his gentler nature is Dandy 704, though he is aware of Dandy's more fragile nature and even refused to move him when he passed out on VOSIM's piano in case he broke him.[10]

Dandy lived with VOSIM, or at least crashed at his home for a long time until VOSIM could no longer tolerate his antics.

The pair have spoken several times to exchange information. On the one hand, Cider wanted more information on Dandy 704, on the other since Cider is human, Cider has been a source of information on humans.

At one stage he spoke about his past though the memories are vague. He remembers being a prototype.[11] The scientists who worked on him were young and ambitious and he was friends with them.[12] They tried to please some investors with VOSIM[13] but they were never impressed by him.[14] Eventually they stopped working on him[15] and left him never to return.[16] The lab he was in was cautioned off and demolished, causing VOSIM to flee.[17][18]

He wondered alone and eventually became very lonely. Though he remembered the pain caused by it, he forget what caused it eventually.[19] In earlier tweets in 2016, he also spoke about his scary experience of the lab falling down around him.

Right now, his home has become a hang out for the other synths with both Dandy and Dee Klatt both frequenting (or staying) there. Though eventually he kicked Dandy out (Dandy in return stole VOSIM's toilet).[20]

VOSIM is the first vocal released based on an unfinished synthesizer, which is why his voice has no claim to fame compared to the others as it was not really released to the general public. Parts of his background story reflects the basics of what happened with the origins of his voice.

His appearance mostly echoes the appearance of the false Maria from the 1927 silent film Metropolis, although it is unknown if this is intentional or not. 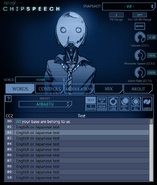 Retrieved from "https://chipspeech.fandom.com/wiki/VOSIM?oldid=5532"
Community content is available under CC-BY-SA unless otherwise noted.