Spencer AL2 is one of the voices that comes with the Chipspeech software. He was one of the original seven voices to come with the program. He is the loyal and valued subject of Lady Parsec and a dangerous AI.

Spencer AL2 is a self-aware pure AI. He creates his appearance and voice by channeling and bending energy as waves. Be careful! If you upset him, his anger has the power of an EMP bomb.

Spencer is a pure AI character, he has no physical form at all and is instead a hologram. He cannot be harmed for this reason, but can in turn harm others. He can cause large explosions at will.

Spencer is not one to be angered due to his love of explosions.

On the one hand, he is not liken to the traditional "villain", as all of his sovereign's orders are for the greater purpose her established "order". On the other hand, Spencer's known actions are not considered a traditional "hero" either because of a unknown, but likely large amount, of loss of life and destruction. His loyalty is bound to Lady Parsec and he will not go against her will and has displayed no attempt to go against her orders.

His anger is unpredictable, but if he wanted to see it through, given his power it is not wise to be at the other end of his wrath. This is a contrast to his sovereign Lady Parsec, who knows better then to throw her wrath around.[1]

Spencer often has a awkward relationship with Dandy 704 and due to their banters (which range from friend to one putting the other in their place) and other interactions, there are periods of time where Spencer flat-out refuses to talk to Dandy. They, however, share a love of explosions and when they are together they can cause a lot of trouble. Spencer likens Dandy to a human teenager and considers him not very mature.[2]

He also goes on special missions for Lady Parsec and is the one most likely to step in a remind the others she is watching and was noted to be her right hand man on Dandy's tumblr. He respects and adores her quite a bit.[3] His missions involve things like leveling cities and blowing things up. He did mention one to do with the timeline, and checked that Dandy was still alive. Apparently at the cost of 704 other Dandys.[4]

Though not confirmed romantically involved, the two get along quite well due to the Lady's need of Spencer's talents and his undying loyalty towards her.

He considers him completely harmless.[5]

According to VOSIM, Spencer was one of the characters around at the time Dandy was involved with Daisy.

Over time, he has gone on numerous missions for Lady Parsec and has laid waste to a number of cities.

Spencer's design is triangular and mimics the early 80s limited 3D style games and 3D CGI model that were seen in movies and games during the era. The most famous examples of this early style include the movie Tron.

"Spencer-AL" gets his name from certain letter elements of the name "SP0256-AL2". 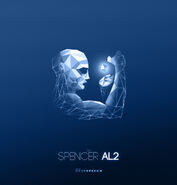 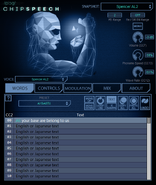 Retrieved from "https://chipspeech.fandom.com/wiki/Spencer_AL2?oldid=5566"
Community content is available under CC-BY-SA unless otherwise noted.