Otto Mozer is one of the voices that comes with the Chipspeech software. He was one of the original seven voices to come with the program. He is a mad scientist with highly questionable morals and motives.

Otto Mozer is a mad scientist and has roboticized himself in order to achieve his plans for world domination. He moves around in his levitating exopod. Since his face is permanently connected to a breathing apparatus, he has built himself a voice generator to communicate. He left out all vocal intonations, since he deemed them to be unnecessary to his purposes.[1]

According to Dandy, as a human he was small and weak, as he had trouble carrying heavy boxes around. Also, he was noted to have poor dressing habits, having his clothes described as being incorrectly sized and committing other fashion faux pas, such as wearing socks with sandals.[2][3][4]

Otto is a mad scientist who made himself into a robot, removing all other human aspects of him that he considered unnecessary; He was inspired by Dandy 704 to become a robot, impressed by the scientific feat that Dandy was.[5] Though he turned himself into a robot, he has the knowledge to turn any human into a robot.[6] His head in encased in an exopod, and is connected to a breathing apparatus. In order to communicate, he has a voice generator that lacks vocal intonations. A short circuit can knock his brain out for a few hours.[7]

Otto's age is vaguely hinted. Otto himself has been around since at least the 1930s as a scientist placing his age as over 80 years old, though he could be older given he was human and likely to have been not a child at the time. Presuming that the flesh he has left is his own, his human appearance notes he was not yet of an old age at the time he began to prolong his own life somehow, though his full conversion to his current form occurred only within the last 12 years. Given that there are several characters with unknown ages, this places him currently as the 3rd oldest character in Chipspeech, behind Terminal 99 and Dandy 704.

Being still human at his core he can suffer from human related issues such as illnesses and he is allergic to cats. He has a pair of tiny, tiny arms and cannot smell since his head is encased in a glass orb.

When CiderTalk'84 was introduced, he commented that Otto did not like socialization and was never impressed by anyone, calling him a "dreary, dreary man". Otto himself does not like newcomers. He is quite blunt on handling responses at times and lacks social skills. He does not like it when the antics of a few of the other Chipspeech robots get out of hand. He has little care for things like his own birthday.[8]

Though most Chipspeech character have morals which align to "good", "neutral" or questionable natures, Otto is as close to being a "evil villain" as the characters get. He is not shy of hostage taking and murder.[9] Judging also by his 2015 "gifts" he regularly harasses other characters, to the point he considered a gift card for "a day free of my seething hatred and mockery" as a suitable gift for VOSIM and Daisy.[10]

He likes things to happen on time.[11]

In the distant past the two were friends and Dandy inspired him to become what he is today. The pair have long gone their separate ways and Otto is no longer shy about threatening Dandy. It is also hinted Otto is the reason for much of the personnel pains of Dandy's past to the point Cider has since warned Dandy to stay away from Otto.

Cider is generally not impressed with Otto and judging by Cider's comments, the feeling is mutual from Otto himself. Though it is clear Cider has some caution of Otto. Upon hearing Cider'84 was Dandy's new boss, the idea of Cider tolerating Dandy's shenanigans earned his respect even if he doubted it was true.[12]

He established that he did not hate Bert, he just didn't care about him.[13] According to Bert, Otto loves to dissemble him. Considering that he and Dandy love to place bumper stickers onto Otto when he isn't looking to see how many they can place on him before he notices, its safe to say that neither pair have full respect of Otto.[14]

When SAM was introduced, Otto did not wish to even know who he was.[15]

Otto Mozer was once a human scientist who worked in a lab. For the most part, he worked alone and didn't have any friends until Dandy approached him, asking for a job because of how the Great Depression hit him.[16] At first, Otto assumed that he was an idiot but then realized that he was rather clever. After a while of working with Dandy, the two started to become friends, starting with one night when he took Otto out to socialize; Reportedly, he received a lap dance and was discomforted by it.[17] At some point, Dandy brought in Bert Gotrax and had him repair Bert.

Eventually, the friendship between Otto and Dandy would change as Dandy met Daisy and they entered a relationship. It was noted that Otto's morals became a lot less clear as time went on. [18] The duo began to drift apart, and eventually Dandy and Daisy moved away, leaving Otto alone. Later, Bert stopped staying around sometime after Otto roboticized himself. [19]

"Evil Otto" was the name of the nemesis of the player in the game Bezerk. Samples of the game were used to make the song Stakker Humanoid. The link between them and Otto Mozer is that the synthesizer used for the game is the same one that Otto Mozer is based on, "Evil Otto" and the Bezerk game are also likely the main inspirations of Otto Mozer's backstory. An official cover of the song by Otto Mozer on the chipspeech AUTOMATE SONGS .01 further confirms the link. 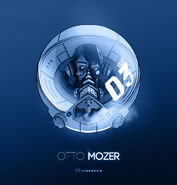 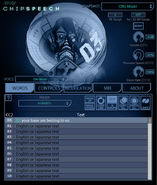 Retrieved from "https://chipspeech.fandom.com/wiki/Otto_Mozer?oldid=5563"
Community content is available under CC-BY-SA unless otherwise noted.