Served as a basis for many speech synthesizers

Dee Klatt is one of the original characters released for Chipspeech and a shape-shifting android on the run.

Notice: Dee Klatt is canonically nonbinary, and is to be referred to by They/Them pronouns regardless of what disguise they are in.

Dee Klatt is a wise and mild mannered android. Long ago, they were unjustly accused and hunted across the galaxy, and became a master in disguise out of necessity, changing into a child, a woman, a young or an old man. Nobody now remembers their true form.

Dee Klatt gets their energy from charging via a plug into a wall socket much like a mobile phone.[1]

As a result of their constant appearance changes, Dee Klatt has a memory loss issue and can no longer remember what they used to look like. Their true nature has also been lost over time and it is unknown who they originally were in the past, including their moral alignment. Their true gender is also not known, though their appearance on Twitter will cause some characters to gender them accordingly. Characters used to refer to dee as whichever gender their disguise was. For example, when the female face was shown, Dandy 704 referred to Dee as a female. However, this has largely shifted, and most characters use they/them pronouns for Dee.

Dee's appearance changes involve the gluing of various elements. [2] They often disguise themselves as other Chipspeech characters.

Their helmet is often a home for Dee's cat Snowball and Snowball will often cuddle up inside it so is not a permanent fixture. Dee has a DECtalk unit as well built in. When VOSIM ponder about how he could die, he noted he could die if his battery ran out. Dee, being also battery powered stated they didn't want to die. What the rest of Dee looks like exactly is unknown, as Dee has only ever been drawn as a head by Pixoshiru.

They admitted on tumblr, they knew very little on human families.[3]

A lot of their posts, particularly ones that use "I", show nervous stuttering (example "I-I don't want to throw him down the stairs"). Like with VOSIM, they are caring about their fellow characters.

Dee Klatt has spoken about that they have come to terms with the idea they'll never remember who they were before they became "Dee Klatt", though they sometimes feel sadness about it.[4] Many of their early 2016 tweets were about discovering methods of unlocking memories of who they once were. Most of the reason they were worried was because they were frightened by being trialed on so little evidence of their "crime". Also due to the memory loss, they do not know if they are "evil". Dee has spent most of their life on the run. When discussing their ideal day, they mentioned the life they would like to lead if things were different, including settling down in a house of their own and not having to fear running away anymore.

Dee's account often has cat-related posts as well as jokes on puns about other characters and their names, they also posted cat images on tumblr when the were active there. Dee also likes robot movies and even has a "cool movies" list.[5]

The thought of disguising themselves as other Chipspeech characters, or being mistake for them under a similar disguise, was also a worrisome thought to them. This is because some of their fellow robots have records of criminal activity themselves and a reputation for trouble.[6]

While they were dating VOSIM, VOSIM mentioned that Dee absolutely loved cellos.[7] This was backed up by the tumblr account which stated they liked "cats, music, cellos, and my old partner Vosim!" in their profile. They stated that the 5 things they most commonly do was; wandering around, hanging out in libraries and places like this, waiting to charge, petting cats and talking to people on twitter.[8] They expressed interest in knowing how to become a Magic girl.[9]

They generally tend to get along with VOSIM. At one stage they were a couple with VOSIM though the pair split in Oct 2015[10] because Dee wanted to protect him. They did regret the break up, as when talking about their ideal day, ending their relationship with VOSIM was brought up.[11]

Dee Klatt has been known to use VOSIM's house as a hang out and is one of the synth robots who frequents his home. Dee saw VOSIM's house as a "safe" house they could hide and charge in. Though for a time they did not visit, they still hung around the proximity of his home for this reason.

As with VOSIM, they also get along with Dandy 704, though this is most likely due to all 3 suffering from memories related issues. Later they went to rediscover who they once were, blocking both VOSIM and Dandy 704 on Twitter.[12]

When it seemed like Dandy 704 was going to jail, Dee wanted to make him a disguise to avoid jail and offered to run away together with him. Due to Dandy taking the words "run away together" the wrong way, Dee stated that if it took it to save him from jail, he would marry. Though they soon had to tell Dandy their just friends and the marrying issue was only part of their "friend code" to protect his freedom.[13]

When Dandy ad CiderTalk got lost at ciTech labs, Dee panicked that Dandy could die and showed concern about death.

Dee also has a pet cat called "Snowball", though Dee did not adopt her, she ended up staying with Dee.[14]

Though Dee and Snowball have become separated at times, they have always found each other again.

Dee has never had a home or a family and has always been on the run.[16]

At some point in their life they acquired Snowball, Snowball never left Dee's side.

According to VOSIM, Dee Klatt was one of the characters around at the time Dandy was involved with Daisy. Dee mentioned meeting Dandy by chance. Dee was in a strange town, the pair met at a bus stop and Dee noticed Dandy because of how he was dressed. The pair got talking and Dandy never stopped, telling Dee of his adventures. Eventually they began to talk to each other about themselves and became friends.[17]

Dee Klatt likely get their name from "Dennis Klatt". The device "DECtalk", which Dee Klatt is based upon, was made from Dennis Klatt's research.

Their ability to change their appearance like comes from DECtalk being used for a variety of speech recreation.

Dee Klatt owning a cat is a reference to the image found on the DECtalk's Wikipedia page. It features the synth unit with a cat sitting on it acting as a scale reference on the size of the unit.

Plogue are currently working towards producing variants of Dee.[21] 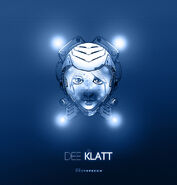 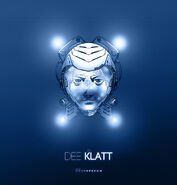 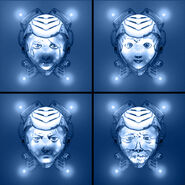 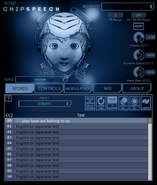 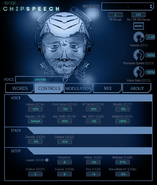 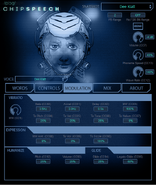 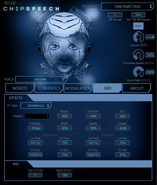 Dee's 2020 Pride Icon
Add a photo to this gallery

Retrieved from "https://chipspeech.fandom.com/wiki/Dee_Klatt?oldid=5684"
Community content is available under CC-BY-SA unless otherwise noted.