Introducing the Mac on January 24th 1984

CiderTalk'84 (also known as "Dr.CiderTalk") was first previewed as a silhouette in Jan 2016.[1] He was unveiled on the 1st of September 2016 as the 9th vocal for Chipspeech. His name was dropped after a sound file featuring him talking was uploaded. The social account he uses was originally called "drhandshake", its name was altered after his unveiling.

Dr. CiderTalk’84 is no ordinary doctor… while normal doctors have a PhD in medicine, economics, physics or other similar fields, CiderTalk has a PhD in everything. He does know everything, and will constantly remind you of it. Every time something goes well, rest assured he will make sure you know that it was because of him. While everybody agrees that he is a genius, nobody can cite an example of something that CiderTalk actually did. Long lasting rumors explaining his powerful charisma would entail secret nano tech that invades everyone (and everything) around him.

CiderTalk'84 is a scientist and the second one introduced as a character to the series after Otto Mozer. Though in contrast Otto is regard as a "mad scientist" while CiderTalk is a "Weird scientist" (according to Dandy 704).[2]

When Rotten.ST took over his account, he commented on how easy it had been since the password was "Cider". In contrast to the other Chipspeech robots, he tends to answer using Chipspeech sound clips over writing, or at least he did at first.

He owns a company called CiderTech. His lab produces ciTech electronics. As noted, the lab has been around since 1984 at least based on its date site navigation maps. He is also confirmed an American citizen as he was able to vote in the 1984 American election. Also, it means he was at least 18 years old by the time of voting. As this was the first time he was able to vote this puts his age as somewhere in his early 40s.

He is capable of getting things like sore throats though claims he cannot get a virus. he however, notes he can suffer from a lack of sleep or an allergy.[3] This is because, aside from his voice, he is human.

According to Plogue, he is quite charismatic, this becomes evidence quite quickly once his Twitter account is up and running by how much he posts compared to some other characters.

He is critical in both a sarcastic and sassy way when it come to comments on the negative aspects of others. Many of his early tweets consisted of banter between him and Dandy 704 with Dandy trying to constantly be dominate over him. This lead to many sarcastic remarks and criticism from Cider. He seems fairly helpful, however, and takes the time to interact with the other characters if they interact with him.

He can be quite witty at times, for example when Dandy 704 calls him "the talking apple", he responded by calling Dandy "the Tea Kettle".[4]

He also likes monochrome colouring. He also mentioned at one stage he does not like uncertainty, but sometimes likes certainty even less.[5]

He is generally not that impressed with Otto, having referred to him as "the floating orb" in his early soundclips. He reassured Dandy 704 he was nothing like Otto and actually enjoys socializing.[6]

Yet despite this, Cider is not a fool and is cautious around Otto, especially concerning Dandy 704.

Dandy's first reaction was to try and dominate and put Cider in his place. Having failed at this, the two have hit it off as friends (though some of Dandy's messages can be mistaken for flirting, which Dandy doesn't seem to be any indifferent over). Cider currently is housing Dandy 704 and has tried to understand the extent of his memory issues. As with VOSIM, he acknowledges Dandy is a fragile design.

However, he is not shy about criticizing him. When Dee Klatt asked Cider since he is a scientist himself, if Dandy was one. Cider replied that Dandy claims he is a expert "babeologist". However, he commented that this did not make Dandy a scientist as he has not seen any proof of any success in his field of expertise.[7]

When Cider accessed Dandy's memories, he found fragments of Dandy's past. wanting to protect Dandy from further pain, he refused to delve into more information.[8] He even tolerates Dandy's constantly flirting with his coworkers at the lab despite not being happy with him doing so.[9]

Since coming to work for him at CiderTech, Dandy has not been shy about advances on him at all, even embarrassing CiderTalk in the process of flirting with him.[10] However, cider usually avoids touching Dandy "like the plague" according to Dandy during one of the rare times Cider asked him to hold him.[11]

It is unknown how much he knows of Daisy, but upon learning Dandy and her were once a pair, he expressed deep shock and concern.

CiderTalk originally lost his voice in a accident involving in a vehicle driven by a inebriated driver.[12] He was just 13 at the time and had a human voice, the accident broke his Larynx. He didn't like any of the prosthetics offered, so he coded his own.[13] He was in hospital for 1 month and his parents brought his desktop computer to him since laptops didn't exist. During this time he did nothing but code and play Zork.[14]

He was also alive during Ronald Reagan's reelection.[15] It was the first time he voted.[16]

He gave Dandy a home and a job at ciHousing after he was kicked out of VOSIM's home in an incident involving his toilet.

Cider the gave Dandy a tour of the lab, getting lost along the way. After several days and Dandy passing out (nearly dying) they made it out. When Dandy regained consciousness, Cider refused to say what he did to Dandy. It turned out Cider probed Dandy's memories and discovered some of his past ventures. Refusing to let Dandy know what happened to protect him from pain, he simply stated to stay away from Otto Mozer.

His love for monochrome is a note to how early Macintosh computers only had a black and white display output.

His use of "ci" in naming things is short for "Cider" - but also a play on Apple's use of "i" in names of devices such as the iPod.

Rotten's hacking is a nod to how several famous CEO and developers have used simple words like "boss" to protect their accounts. This despite the individuals high ranking company position, "intelligence" or knowledge of password security - all leading to risky security issues within their respective company.

In the 16 bit era video, he says "it is great to be out of that bag". This is a nod to the original '84 Macintosh video which starts off the same. Also he says "I can't do that Dave". This is a reference to the film 2001: A Space Odyssey, the words are spoken by the computer Hal. 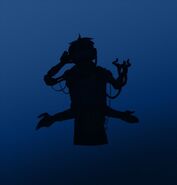 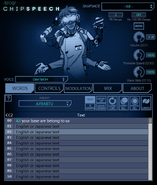 Retrieved from "https://chipspeech.fandom.com/wiki/CiderTalk%2784?oldid=5645"
Community content is available under CC-BY-SA unless otherwise noted.