Bert Gotrax is one mischievous little brat. Like a post-modern Pinocchio story gone wrong, he has escaped from his creator’s workshop before the execution of a patch to fix his foul mouth. He now roams in the streets and back alleys, a skilled parkour athlete and wanted graffiti artist.[1]

Bert Gotrax has a very humanoid build, with some oddities of his design giving him a rather "alien" appearance, most notably his abnormally large eyes. He appears to have small horns underneath his hoodie.

He wears a partially open hoodie with an isometric cube pattern on it, which is reminiscent of the pyramid you have to traverse in Q*Bert. He has one black glove on. We have never seen his legs.

Bert was originally seen as one of the "youngest" characters, with the age often given for him being 12 years old. This, however, is directly contradicted by many things, such as Bert referring to himself as a teenager, and Rotten.ST saying he "isn't a child." Rotten has said that Bert's personality has changed over time in relation to this, and has speculated that he's "probably just in a bad spot" mentally.

Bert is banned from simple kitchen tasks due to "being a liability," as he once put a fork in a toaster. He is also apparently banned from parties due to "being too young," to which he responded that he is a robot, and age does not matter in that situation- though he is now confirmed to be an adult.

Compared to the other characters, his twitter account has far more internet slang, misspellings and he uses more street slang on top of this. He also makes puns with his name (example; "Baby don't Bert me," instead of "Baby don't hurt me.") He was less active on twitter than most other characters during the events of season one, but activity ramped up significantly upon the start of season two. His even less active- and now essentially dead- tumblr account boasts that he is "super good at graffiti, like he is a everything else."[2]

He views singing as his pastime, and it has been revealed that Rotten helps him learn music at times during his visits.

Despite his love of parkour, he openly admits falling off every now and then, yet finds the act of falling off just as thrilling as not falling off. He also "swears" a lot. However, the words are censored with symbols, much like Q*Bert (i.e. "@?#!@!.")

Despite acknowledging Dandy 704's rudeness at one point, he also stated he can't stand being mad at him. Bert has often made comments such as how Dandy wouldn't last 5 minutes in an old peoples' home due to his "bad mouth."

At one point he also tried to mock Dandy by breaking into his closet and stealing a jacket of his. He frequently and openly made fun of him. He also panicked at one point after believing to have killed him after falling off a building during Parkour and landing on him. Though he was concerned when he left at one point, Bert's concern was short-lived due to his self-centered nature. Despite this, after an incident where Dandy left himself without power for 4 minutes, Bert sticks around Dandy reading comics in case Dandy has another incident while he cleans his water tanks.[3]

He has mentioned Otto from time to time and they know each other due to their shared history. Otto has opening admitted that he did not hate him, he just didn't care about him. Bert's tumblr account notes how he loves to mess around with Otto while Otto loves to dissemble him. Bert and Dandy love to slap bumper stickers onto Otto as part of a game to see how long it takes for him to notice.[4]

Bert and Pedro have developed an adoptive sibling relationship, with the two frequently being shown to get along very well.

Bert and Rotten are best friends, with them knowing each other for years and Bert visiting Rotten frequently- even breaking into jail to visit him once. Bert posts about Rotten frequently, and has a habit of liking most tweets where he is mentioned by name.

Bert was made by a man named as Mr. Gotrax, who has since passed. Bert's hoodie was given to him by Mr. Gotrax. He is stated to be repressing memories from when he was living with him.

At some point in his past, he was taken to Otto Mozer to be repaired by Dandy.

He mentioned after Daisy left Otto Mozer's lab, he snuck in and plugged her backpack into a terminal. Bert would also often break into Otto's lab.

The following year after Dandy started working in CiTech, Bert broke into CiderTalk'84's lab.[5] After trying to find some chocolate milk, he got stuck in a vending machine.[6] He proceeded to play Roblox on Cider's computer.[7] He also restocked the Vending Machines with 'Bepis' brand drinks.[8]

Bert is named after the game "Q*bert.

His constant, albeit censored, swearing is a reference to Q*bert. 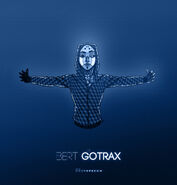 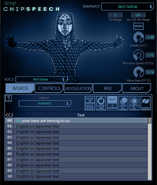 Bert in the Chipspeech Program

Bert's 2020 Pride Icon
Add a photo to this gallery

Retrieved from "https://chipspeech.fandom.com/wiki/Bert_Gotrax?oldid=5682"
Community content is available under CC-BY-SA unless otherwise noted.